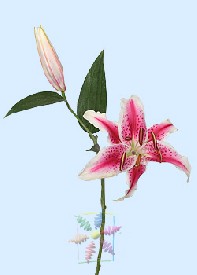 From humble beginnings, the versatile and resilient Stargazer lily has become one of the premier lilies of the cut flower world. As one of the most beautiful lilies available, the stargazer can send a variety of messages from “Thank you,” to “I’m Sorry.” A blushing bride becomes a radiant beauty when carrying a wedding bouquet of Stargazer lilies. Heartfelt sympathy is conveyed with the use of Stargazers in a standing spray. But where did this amazing lily come from before it graced our floral arrangements?

A relatively recent addition to an already rich legacy of lilies, the Stargazer lily is a hybrid cultivated to blend beauty with heavenly aroma. Lilies have typically signified a sense of purity as far back as Roman and Greek times. The Stargazer is no exception with a flower meaning that cuts right to the core of this philosophy. “Pure of heart” and “heaven in your eyes” are flower meanings strongly associated with the Stargazer lily. Lilies as a whole have appeared in folklore around the world and used as a spiritual and philosophical metaphor for centuries. Following the path of its ancestors this lily mystically displays both prosperity and the ideals of the daydreamer. The Stargazer along with its sister – the white Casablanca lily – have become principal players in sympathy arrangements.

It may come as a surprise that such a grandiose flower came from incredibly humble beginnings. In 1978, Leslie Woodriff successfully achieved a hybrid of Oriental and Asiatic lilies, which he would later name ‘Star Gazer’ because of the way the bloom opened toward the sky. The birth of this remarkable hybrid lily created a revolution in the lily world. On the verge of a beauty that could not be surpassed, one man poured his heart and sole into a marriage of aroma and visual splendor. The Stargazer was the combination of the bell-shaped, aromatic Oriental lily and the brightly colored, upright Asiatic lily.

It was literally the best of both worlds for flower arranging. Although at the time floral designers adored the numerous Oriental lily varieties with their tremendous fragrance, the large downward facing blooms presented challenges for flower arrangements. The stem often snapped under the weight of the blooms during harvest. If the flowers made it to the flower shop intact, the bloom position often made them difficult to work with. On the other hand, Asiatic lilies were brightly colored small blooms that were easy to work with. However, they lacked the pizzazz of the Oriental lilies. The ‘Star Gazer’ hybrid contained the most desirable traits of the two types. By crossbreeding two already popular flowers Woodruff created a flower that was both pleasing to the eye and to the nose. However, business was not Woodruff’s priority. His passion was lilies. But this lily marriage would go far beyond its humble home.

The Man Behind The Amazing Stargazer Lily

Leslie Woodriff lived in a ramshackle home and greenhouse where he conducted his primitive crossbreeding experiments. Using a glass bottle coated on the inside with black paint, Woodruff would tap a lily on the side of the bottle, gather the pollen with a camel-haired brush, and implant the pollen from one lily into the stamen of another.

Woodriff was as eccentric as his lilies concoctions. He was wholly consumed with his practice of crossbreeding. He was known to call into radio talks shows and interrupt whatever conversation was going on at the time to discuss current developments in lily breeding. He even contacted President Jimmy Carter to inform him about his lilies.

Woodriff never saw the revenue from his most famous lily. In fact, he had little to do with the hybrid aside from creating it. He never obtained a patent for his hybrid. His business partner was the one who actually obtained the rights and pushed the lily into the path of notoriety.

Obviously, the Stargazer lily’s ornate appearance says little about its humble beginnings. Little is known about the parentage Woodriff used to create the Stargazer. He rarely kept detailed, consistent records of his crossbreeding attempts. However, one possibility is an Oriental lily from souther Japan , Lilium nobilissum.

Whatever the Stargazer’s origins, the flower is one of the most popular cut flowers on today’s market. It has something to please every buyer and florist. The dramatic, large blooms make it ideal for incorporation into mixed bouquets or as powerful focal flower in something like a Stargazer wedding bouquet. The brilliant color and divine scent make it an ideal bloom for any room.

Stargazer – More Than The Queen Of Cut Flowers

Royalty in the cut flower world isn’t the only position the Stargazer holds. This lily is a remarkable garden plant. Caring for Stargazer lilies in the garden is a simple task. Planted in the spring and Stargazers will bloom in the summer and fill the garden with the same heavenly aroma as they do in a flower arrangement. This delicate beauty is a hardy flower that doesn’t shy from the elements. Like the man who created it, the Stargazer has a passion for life and a need to beautify the world.

The stargazer is the dream of a cheerful, hardworking man with an infatuation for lilies. This striking lily is a multifaceted cut flower that remains as bright and as beautiful as Woodruff’s passion.

The next time you need to send flowers think about sending a flower arrangement with Stargazer Lilies.

Planning a wedding? Ask your local wedding florist about using Stargazer Lilies in your bridal bouquet.

For more information about the origins of the ‘Star Gazer’ and it’s creator Leslie Woodriff read Amy Stewart’s Flower Confidential.